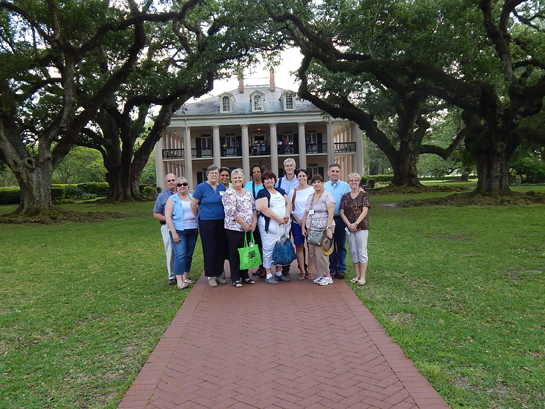 LAPLACE – The River Parishes Tourist Commission recently hosted a group of travel writers and tour operators from several states on its first combined familiarization tour of New Orleans Plantation Country last week.
The immensely successful tour was introduced as part of an effort to increase media coverage and tour sales of the area. RPTC arranged multiple tours to plantations, restaurants, and swamps from  May 6 to May 8. The itinerary included stops at Frenier’s Landing in LaPlace, Evergreen Plantation in Edgard and a tour of the surrounding swamp lands, courtesy of Cajun Pride Swamp Tours.
The tour was a collaboration between Megan Ryburn, RPTC tourism sales manager, and Jo Banner, RPTC communications manager, using funding obtained through a $54,000 BP grant from the Tourism Recovery Fund. The tour participants came from as far away as Pennsylvania, California and Missouri.
RPTC Executive Director Kimmie Carlos said the ultimate goal is exposure.
“By the end of the tour, they came up and hugged each and every one of us, if that gives you some idea of how much they came to feel like we were their friends and partners in tourism. The more media and press that know about our area, the more coverage we’ll get and the more people that will want to come visit. As far as tour operators, if they don’t see it, touch it, smell it, feel it, they don’t know how to sell it,” she said.
Communications Manager, Jo Banner echoed the same sentiment.
”It’s called the familiarization tour, and it’s really to get them familiar so they can experience first hand. Although we do a great job with our advertising, word of mouth is always the best. Once we can invigorate all of their five senses, we know that they can go back and really communicate how great this area is,” said Banner.
Banner also said many of the participants have already begun featuring the local area throughout their social media platforms. One participant, writer Renee Gordon, has already written at least two columns about the tour for the Philadelphia Sun newspaper.
Banner and Carlos said they would keep more tours in mind for the future, based on the success of their initial attempt. For more information about the River Parishes Tourist Commission call 985-359-2562 or visit NewOrleansPlantationCountry.com.