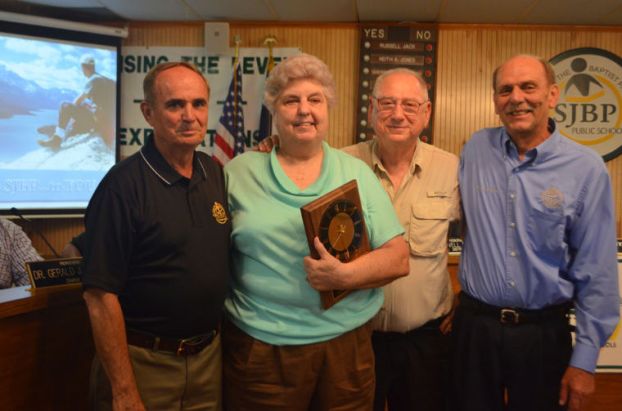 RESERVE – The St. John the Baptist Parish School Board celebrated its recent retirees and gave thanks for their dedicated years of service during its regular Thursday evening meeting.
Each retiree received a plaque in recognition of their hard work. The recognized retirees were: Wayne Haydel, Kathy Bailey, Clarence Brown, Robert Powell, William Boles, Trudy Cupstid, Glenda Webre, M. Cherie Bourg, Bonnie Clement, Zachary Dubose, Eileen Prescia, John Bailey, Gwendolyn Entremont, Cindy Gillies, Lois Frank, Georgia Clesi, Gloria Starwood, John Ellis, Margaret Hastings, Hazel Lawless, Sarah Tregre, Diana Winchester, Catherine Etienne, Percy Williams, Stephanie Waters, Debra Washington, Shelton Smith, Suzanne Remondet and Sybil Burns.
The Disaster Selection Committee also attended the meeting to officially announce which project management firm they chose to recommend to receive the Disaster Management Service Contract. The committee chose Hammerman and Gainer Inc. over competitors J. Caldarera and CSRS, a decision that was met with gratitude from the board members.
“I’d like to say each and every one of you selected someone that did a fantastic job. There was no bickering. There was a lot of professionalism,” said Raydell Morris, the committee head. “All of our meetings were 100 percent attended. Everybody was there, everybody scored, and this was the conclusion we came up with.”
“This is the way it’s supposed to be done in terms of community and getting involved with the board, because this is not just the board’s decision, it’s the public’s decision,” said board member Patrick Sanders.
Morris also announced that final scores for each company had changed slightly from the original report. Morris said that the auditor present during the initial scoring had reviewed the score sheets and found an over scoring error on the part of one of the committee members and had recalculated all of the scores.
The recalculation reduced the margins between the scores, but the results remain the same. The final scores were: HGI, 2467.50; CSRS, 2433.50; and J. Caldarera, 1853.45.

VACHERIE – On Wednesday evening, the St. James Parish Council adopted a previously dicussed mosquito-spraying ordinance, but not without some... read more