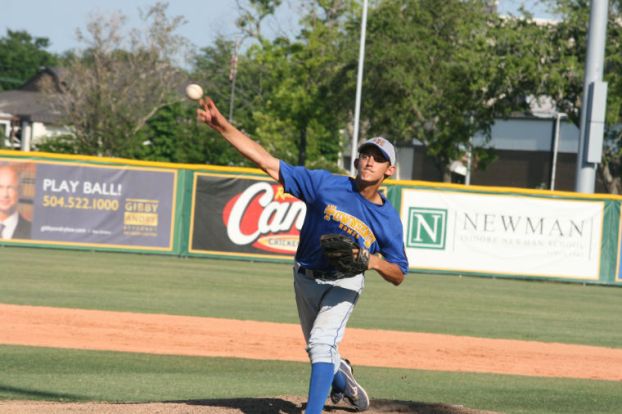 NEW ORLEANS – The foundation of the St. Charles Catholic baseball program has always been built on pitching and defense. And while the Comet bats were quiet Monday, their gloves were anything but.

Mason Bordelon hurled a complete game shutout and Townsend Homes defenders turned in a slew of highlight-reel plays as Townsend came away with a 1-0 victory over Holy Cross-based Ponstein’s in an American Legion game at Delgado’s Kirsch-Rooney Stadium.

Townsend Homes overcame Ponstein’s starter Logan Tarauella’s one-hitter, scoring the deciding run on Dane Authement’s suicide squeeze bunt RBI in the top of the seventh inning. Bordelon was hit by a pitch to lead off the inning and Eian Mitchell drew a walk. That brought on pinch hitter Justin Loupe, who hit a sacrifice ground ball to move the runners over.

Authement came up next and delivered a push bunt to the right side of the infield, bringing home a run. Ponstein’s got the second runner out at home plate and allowed no further damage, but Bordelon retired the side in order in the bottom half to seal the victory.

“I can’t say enough about Dane to get that squeeze down. They knew it was coming and he executed it well,” said Stein. “And the same for Justin Loupe to push those runners over. Those guys each stepped up in a big spot.”

Said Bordelon, “We really needed that. Everyone was saying all day that we just need one run with this defense, and that got it for us.”

Bordelon allowed six hits and two walks over seven innings, finding success by relentlessly pounding the strike zone and getting ahead in the count early. He also recorded Townsend Homes’ lone hit on a double.

“Coach Wag and coach Wayne always make it a point that the first strike on the first pitch is the most important,” said Bordelon. “So it’s what I always try to do.”

He got plenty of help from a Townsend Homes defense that seemed to feed off of each big play as the day went on.

First came a tough stop by shortstop Kameron Keller with two on and none out in the first inning. He made the grab and combined with second baseman Colin Bosco to turn a double play that erased an early threat.

Third baseman Justin Ory came up big in the fourth inning with one on, making a backhanded stop and strong throw to turn what looked primed to be a potential extra base hit down the line into an out.

In the fifth inning, it was Connor Western’s turn, robbing Chip Bonura of a leadoff hit via a diving catch in right field.

And behind the plate, Austin Weber had a strong day, highlighted by throwing out two baserunners on steal attempts.

“My defense played behind me,” said Bordelon. “(Ponstein’s) got some guys in scoring position, but they stepped up every time we needed a play.”

Added Stein, “Many of our guys are doing a lot of other things. Mason works at the kids camp beforehand, we’ve got 13 at football practice at 7 a.m. For them to come out and compete like they did today, I couldn’t be prouder.”

Connor Smith pitched five 1-hit innings and Townsend led 3-0 in the sixth, but Post 307 made a push after Smith left the game.

Weber took the loss in relief for Townsend. Bordelon and Western each went 2 for 3.

By RYAN ARENA L’Observateur LUTCHER – The release of the Class 4A All-State baseball team provides a fitting postscript on... read more