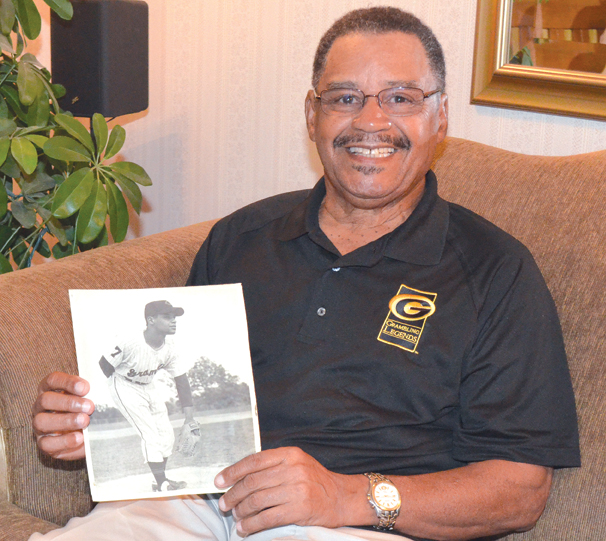 EDGARD – Retired educator and former minor league pitcher Hillary Bossier was recently inducted into Grambling State University’s Legends Sports Hall of Fame.
Bossier received notification of his nomination in January. According to the hall of fame website, the Egard resident led the nation with a 0.53 earned run average in 1961, as Grambling claimed its first-ever Southwestern Athletic Conference baseball title.
Bossier was the son of a farmer and the youngest of five siblings. He said he never originally intended to go to Grambling, but was “tricked” into it by his mother and older brother.
“After I left high school, I went to Denver, Colo., for a couple of weeks. My brother ran me back — my mother had planned for me to go to college at Grambling without me knowing anything about it. I arrived at home about 1 a.m. off the bus and at 5:30 I was on my way to Grambling and didn’t know anything was going on,” said Bossier, chuckling.
Bossier’s brother had served in the Korean War and eventually moved to Colorado. Bossier thinks that his mother and brother wanted him to go to Grambling instead of a Colorado university because he had both friends and family members that attended the school. At the time, his cousins Albert and Alfred Green were enrolled.
He had previously attended at state playoff at the university while he was still in high school, where he met 2012 hall of fame inductee Clyde Parquet, and Albany Jones, a track and football star from St. James Parish. Ralph Jones, the president of the university and baseball coach, had also given Bossier a full baseball scholarship. At Grambling, conditions were ripe for Bossier’s success.
“We had great teams when I was there, oustanding atheletes. You have to realize at the time I was up there, it was still segregated in the south. That means that a school like Grambling and other traditional black schools throughout the SWAC, they had the top athletes because the south was not intergrated,” said Bossier.
Bossier said his favorite aspects of his time at the university were great friends, a great coach and a great team. One of his fondest memories was a time in 1962 when he struck out 17 batters in a seven-inning game against the Alcorn Braves.
“At Grambling I met a whole lot of lifetime friends, many of which I am friends with today. Grambling is a place where everybody is somebody,” said Bossier.
Bossier also met his wife, Myrtle, at the university.
Bossier said his other favorite aspect of his time at Grambling was the amount of wins his team amassed during his career. The former pitcher said he is not a sore loser, but likes to win.
“We won a lot of games. We didn’t lose too many games during my four-year career. I think during the years I was there we had about seven National Association of Intercollegiate Athletics All-Americans,” he said.
Bossier signed with the Midwest’s minor-league affiliate of the New York Mets. Although he saw some success with the team, going 6-2 in 1962 with 71 innings pitched, he only pitched for two seasons. Bossier said his time with the team was “difficult.” Though there was no official segregation in the region, Bossier said there was a definite difference in his treatment versus that of his teammates.
“I couldn’t stay where the other athletes stayed. After the games, I went my way, and the other guys went their way. Most of the time, I was by myself,” he said.
Bossier said he probably could have gone into professional baseball from that point, but an arm and shoulder injury prevented him from going much further. Ultimately, Bossier decided to go back home, where he went on to become a coach and educator at Second Ward High School in 1965. In 1977, he became an instructional supervisor at the district. He stayed in this position until his retirement in 1987.
Bossier said he is honored to be considered worthy of the hall of fame.
“It felt great. To be included among so many great athletes, some of the greatst athletes in the world really, that’s a great feeling,” he said.
Bossier will officially be inducted on July 13 during a special ceremony at the university. The event is open to the public. For more information on the event or its history or to purchase tickets, visit www.gramblinglegends.net.