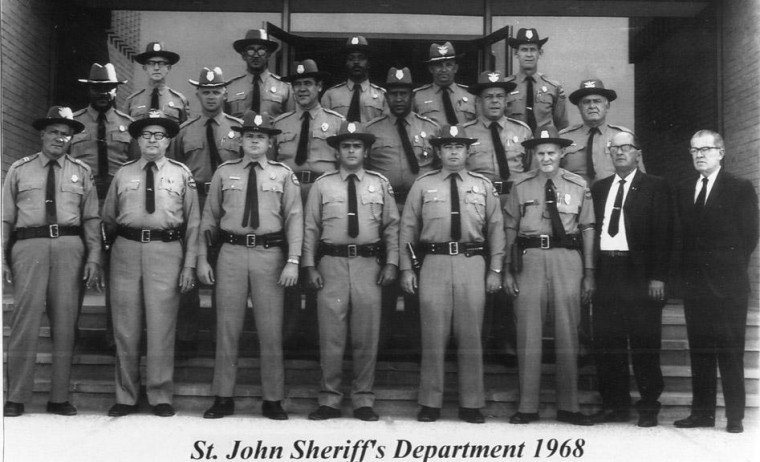 Times have really changed since 1968. The picture is an old photograph of the St. John Parish Sheriff’s Office in the year 1968. P.D. Hebert was sheriff, and the photo shows all the deputies.

There were very few police cars during this time, and when one shift was over, the deputies would turn their patrol cars over to the next shift.

The police radios were mounted in the cars, so if you left your patrol car for any reason, no contact could be made with the deputy until he returned to the car. Remember, in 1968, there were no such things as cellphones. It makes you wonder how they got by?

Today, the St. John Parish Sheriff’s Office, under the command of Sheriff Wayne Jones, has four patrol shifts and more deputies on one shift than Sheriff Hebert had on his entire department.

Remember, I stated that times have changed. Well, some of the reasons for this change are the larger population, more tax money to run the department, newer and more modern police equipment, and the list could go on and on.

Just look at the changes that have taken place in the past 44 years. So, in 44 more years, the year will be 2056. Can you imagine what changes will take place and how the department will change? Well, maybe someone will write or text or communicate to the readers about the St. John Parish Sheriff’s Office in 2012 and wonder how these deputies got by.

The Louisiana Treasures Museum has a wall dedicated to all officers from the state of Louisiana that were been killed in the line of duty. The “Gone But Not Forgotten” wall is our way of remembering these officers that paid the ultimate price while protecting you. We might forget how small or how large a department was, but we must never forget these officers that gave their life in the line of duty.

For more information and hours of operation or to schedule group tours of the Louisiana Treasures Museum, call Wayne Norwood at 225-294-8352.