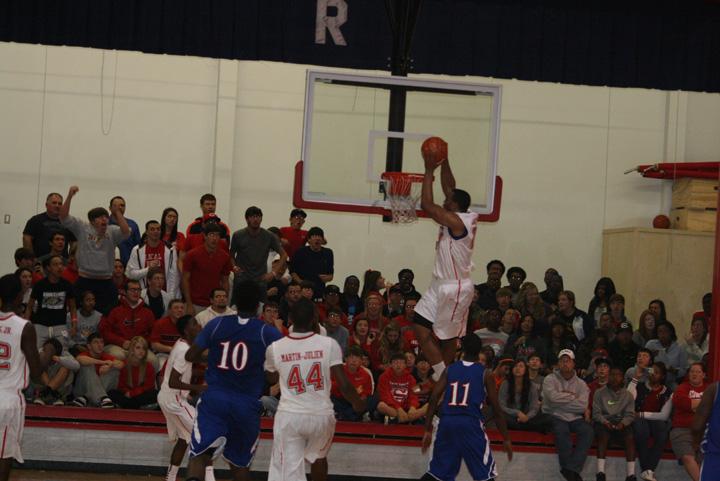 RESERVE — Track and field season may not yet be underway, but Riverside and John Curtis sure did their best to fool everyone on that point on Friday night.

A high-scoring game was expected, indeed. But the “Runnin’ Rebels” lived up to their name and then some in a 105-93 track meet of a victory over Curtis, one that secured a split District 10-2A championship for the Rebels, an honor shared with the Patriots.

Fresh off of his announcement that he has committed to play at Baylor, Ricardo Gathers scored a game-high 26, including 14 second quarter points — and a number of earth-shaking dunks.

“We knew they wouldn’t back down,” said Gathers. “But we’ve been preparing for them for the last two weeks. This is all we’ve talked about.”

In the first district meeting between the teams, an 85-66 Patriots’ win, Curtis held Gathers to 12 points, well below his normal scoring output. But this time, Riverside flipped the script, limiting LSU commitment and Curtis top scorer Malik Morgan to 13. Morgan scored 25 in JCC’s win over the Rebels and scored 50 last season in a loss to Riverside.

“I don’t think we were prepared mentally the last time,” said Thomas. “We went hard tonight. We wanted to play at our highest level and not let them in our heads.”

But Friday night began with Zelvin Smith virtually glued to Morgan’s hip, denying him the ball, and it set the tempo for the rest of the night.

“We set out to play ‘in your face’ defense, on him specifically,” said Gathers.

Both teams came out hot from the field, though, and remained so.

Riverside led 26-19 after the first quarter, one in which Banks got going — he scored the first eight Patriot points and 14 in the quarter.

Riverside controlled the boards in the period behind its front line of Gathers, Smith and six-foot-nine eighth grade center Khalea Turner.

“I thought Khalea really set the tone … we dominated the glass early on and that was something we set out to do tonight.

“The bottom line is that we don’t have eighth graders anymore, don’t have seniors. At this point in the year we have 13 capable players with experience.”

Riverside set the foundation of its victory in the second quarter, outscoring Curtis 33-22.

Gathers got things started inside with a basket, then he scored after pulling down a rebound and going coast-to-coast for a layup to make it 30-19. Smith hit a 3 to make it 33-20 with 7:07 left to cap a quick 7-1 run in the first 53 seconds of the quarter.

Dupree scored on a putback to break up a 12-1 Rebel run, but Martin-Julien got a shooter’s roll on a short jumper to answer.

After two Banks free throws, Gathers made his presence felt in a big way, getting the ball again on a rebound and again driving all the way up the floor — this time, there would be no layup, but a highlight reel one handed slam that brought the standing-room only Rebel crowd to its feet.

A Durant 3 made it a 10-point game again, but Gathers scored in transition to answer. A Morgan score soon cut the lead to eight, but the Rebels went on another big run, this one sparked by a Julien floater. Thomas made a big block on defense, then canned a 3 at the other end.

Curtis rallied, and despite trailing by 14 early in the fourth quarter went on a quick 8-0 run to cap the Rebels’ lead to six at 81-75, the final bucket coming on a Durant shot with 5:22 left to play.

“We got soft in the middle defensively and had a couple of blown assignments, combined with some empty possessions. That let them back in,” Byrd said.

But Smith scored off of a spin move at the other end to push the lead to eight, then Crowfield hit a corner 3. Gathers made an emphatic slam dunk with 4:15 left and all of a sudden, the lead was back at 12, 88-76. Curtis never got close again.